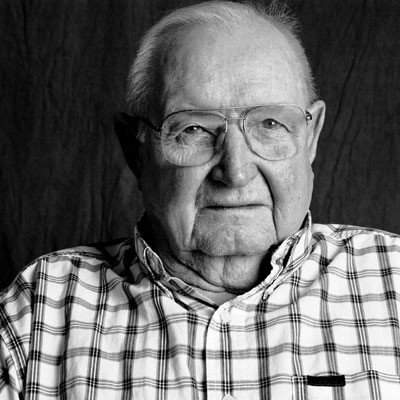 February 12: James Garner was born in Manchester, Tennessee. He was the oldest of six children. His father was as a Baptist preacher, and his family lived on a farm, not having much money but always enough to eat.

December: He was the first volunteer from Coffee County to join the army in World War II. After finishing his first year of college he was teaching, but decided to enlist because he was aiding those being drafted as they got their numbers. “I knew that the war was going on over there and that Hitler was going to try to rule the world, so to speak, and I didn't want that to happen.”

After he was commissioned as an officer, he married his wife, Geraldine. Captain James Garner served as the head of military police, Acting Provost Marshall for the 15th Corps, under General Hayslip. James traveled by ship with his troops to England and Ireland before D-Day.

June 6: James and his troop landed at Omaha Beach in Normandy, France on what came to be called “D-Day”. While traveling by jeep he looked to either side and saw his men being killed. They surrounded the German soldiers and drove them off. One of his drivers died, and another survived, but he lost some of his troops there at Omaha Beach. James and his troop then fought their way through France and into Germany.

James had no idea what was going on in the concentration camps but was ordered to go into Dachau Concentration Camp. The gates were locked, so James had his men blow a hole in the wall to get through. As they did, they were astonished by the smell of flesh, and by the sight of the Germans burning people in ovens. James and his men tore down fences, and killed the German soldiers who were guarding the top of the fence. As he went through the camp, James did not dare feed prisoners for fear that it would harm them. He would later find out that may have saved some of them, because some died from being overfed. The prisoners were relieved to see their liberators. James then left a few of his men in Dachau and continued to Austria. James came back to Tennessee after the war to meet his daughter of 15 months for the first time.

James left the army and went back to school to become a pharmacist. He regretted that decision, because he liked teaching, but felt too emotional after what he had seen during the war.

Years later, James visited Europe and some of the places he had served. When he returned he visited schools and told about his experiences in WWII.