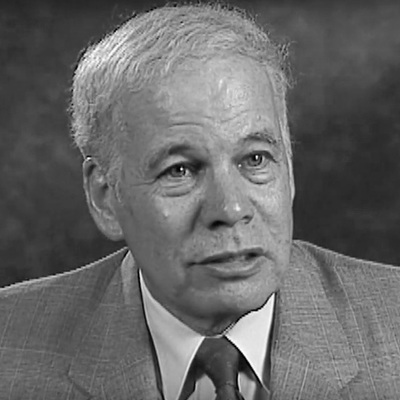 “Over the door was a date of 1500, …and I remember…saying… Adolf Hitler who was an Austrian says these people aren’t German, and they have lived in this one house…for four centuries.”

“Over the door was a date of 1500, …and I remember…saying.., Adolf Hitler who was an Austrian says these people aren’t German, and they have lived in this one house…for four centuries.”

Although his grandfather moved to the U.S. from Germany when he was 19 years old, the family still felt tied to those who were suffering in Germany under the Nazi regime. Leon and his father traveled to Europe in 1934, 1936, 1938, and 1939 to try to get Jews out of the country. In 1934, they traveled to Strasbourg, France. In 1936, they actually went into Germany. Leon remembers the extreme nationalism of the people in Stuttgart in 1936, stating that, “the whole city was decorated with flags everywhere, much more than you would see here in this country anywhere on the Fourth of July.”

In 1936, he also remembers that the Jewish residents were very anxious and hoping for the possibility of getting out from under the Nazis. The poor were more willing to leave than the wealthy, because the wealthy felt that they had more to lose if they left their homes. One of his grandfather’s brothers, Moses, was a multi-millionaire, and he thought his position was secure; he just didn’t think horrible things would happen in Germany. May said, “They thought, well, we’ll outlive Hitler,” so they were reluctant to leave. During Kristallnacht, Moses and his son-in-law were arrested, and they paid heavy fines to be freed; this event convinced them to get out of Germany.

The May family provided many Jews with affidavits, enabling them to escape from under the Nazi regime between the years of 1934 and 1939. Leon said that his father felt very deeply that he must save the Jewish people; he was also a Zionist. Because his family had started the May Hosiery Company in 1896 in Laconia, New Hampshire, they were able to provide jobs for the Jews who immigrated to the U.S. When Leon’s father was four, his family moved to Nashville, Tennessee, and that was where Leon lived. Leon said about the rescuing, “I don’t really know (that) there were any philosophical discussions; it was just a thing you did.” For some of the refugees, especially the wealthy, moving to Nashville was a shock. The heat and the decreased position were difficult, but they were thankful to be in America.

In 1965, Leon took two older children to Hoechst and Dachau to help them understand that the worst can happen, and if there’s a chance to save people, we should save them.