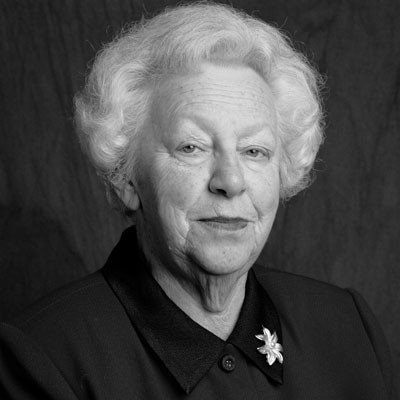 Nessy Wolpert Marks was born in Pöszeiten, Lithuania. She was the middle child of five children; the rest were boys. The Jewish community was very poor, but her family produced chemicals and paints and had land.

October: A friend, who became a Nazi, came to Lithuania in October 1938 and told Nessy’s father to leave Europe. He came back later and warned her parents again, asking them to give their word never to divulge his name, which they never did. Nessy raised money to help young Jewish pioneers be smuggled into Palestine. She won a certificate for her work, which would have allowed her to also go to Palestine, but her parents would not let her go.

The family was forced to leave their home for Kovno. With two hours to get out of their home with what they could carry, her parents sent friends into their home for some jewelry and paintings, which the friends were to keep for them. They were not that well known in Kovno, so when the communists picked up people to send to Siberia, because they were unknown and quiet, they weren’t picked up. The communists had taken away Nessy’s parents’ building, but they were allowed to live there.

March: The district of Memel, which included Kovno, was taken by the Nazis. Nessy’s father saw the seriousness of the war, and arranged for them to leave, bribing and getting them Russian visas. They were to go to Russia and then Pearl Harbor with entry visas to Canada for September 1940.

June: Without warning the Russians arrived on a Saturday, and by Monday no one was permitted to leave. They were forced to wear stars on the left side and on the right back shoulder to identify them as Jews.

June: War began in Lithuania. Within days of the beginning of the war, Nessy’s grandparents were murdered by Lithuanians working for the Nazis. There were also bounty hunters in Lithuania. If they found a Jew hidden, they were turned in for a pound of coffee or salami.

All Jews were forced into the Kovno Ghetto, which was close to the Niemen River, but they were not allowed to go to the river for water. If anyone went to the river they were shot and murdered. Kovno was surrounded by old fortresses, and the ninth fort became “the killing field.” The Jews of Plunge (Plungyan), where Nessy’s father was born, were put into two synagogues and a house. They were starved and then burned alive.

The Jews in the Kovno Ghetto were treated as slave labor. Nessy’s mother was taken to the Kovno airport, and if there wasn’t enough work the prisoners were forced to lift heavy stones and carry them from one place to the next.

One day, Nessy’s parents announced to her that she would be hidden by Magda and Peter. Magda had been her family’s cook, and was a Lithuanian Catholic. One day Nessy slipped away when the guards were drunk and she was not counted at the gate. Nessy hid for a couple of months with Magda, Peter, and their young children and parents in a little house that her family had bought for them. If they had been caught, the Nazis would have wiped out the whole family. She had heard a rumor that her parents were murdered. Magda and Peter would not let her go back into the ghetto to check on them. The rumor was not true.

Nessy was sent to Vilnius to relatives of Magda and Peter. She was given a birth certificate of a girl who was registered with the church. The priest there thought that if she was caught, she would have another 30 minutes to live before they would find out who she really was. That false birth certificate allowed her to obtain Lithuanian papers. Nessy’s father was sent to Dachau for almost four years.

Nessy worked in an orphanage. Every week to ten days, the nurse called in the Lithuanian and German Nazi authorities. They went through the entire orphanage looking for anyone with a so-called “Jewish” look. They pulled out all of the circumcised boys, and anyone else that they thought was Jewish. The Nazis took them to a garbage heap on the orphanage and threw them there. They put a ball in the children’s mouths to stop them from crying, which eventually suffocated them, and if it took too long, they shot them. Some of the nurses and Nessy tried to save some children, but they never succeeded.

One day Nessy was called into the administrator’s office, who was a doctor. He said that there were rumors that a Jewish girl under false papers was working there. He said he had watched her and there was absolutely no doubt that she was Jewish. He said that her language is better than the other maids and that she had good table manners. He said he had to hand her over to the Nazi authorities. He asked her real name, and then said he would stall the authorities. She realized that he was one of the few Lithuanians who were fighting against the Nazis in the underground. The administrator told her he would get her the necessary papers to go in a convoy into Germany.

Two days later, two men picked her with false papers, brought her a couple of sandwiches, and pushed her onto a train. She travelled for eight days. The Nazis let them out, and were given water and a little bit of food. They arrived in the State of Mecklenburg, Germany, and Nessy was sent to a farm owned by a Lord, who was a big Nazi supporter. They were locked up at night, and if they wanted to go to visit somebody in another village, they had to have a permit to go. They were not free, but also not in a concentration camp. She and the others were considered foreign workers, and were badly treated by the Nazi overseers.

Nessy was in Bremen, Germany.

January: Nessy’s mother was liberated from Stutthof Concentration Camp and returned to Kovno. Her mother saw the friend who was keeping the few pieces of jewelry and paintings for them, but she was wearing one of her mother’s fur coats. The woman pushed her mother away and she never saw any of those possessions again. Her mother managed to go to Magda’s house where they nursed her back to health. Nessy’s parents had left some jewelry for Magda and Peter to use as barter, but all of it was returned to her mother. Her mother used that jewelry to obtain medicine and food, and then to smuggle herself into Berlin to be reunited with Nessy’s father and brothers. She also helped smuggle other women into Germany for reunions with family.

May: Nessy’s two youngest brothers were murdered hours before liberation, turned in by Lithuanians. The regular guards had already left. There were a few prisoners who thought they were already free, and were hiding in ditches. But some Nazi stragglers with dogs found them. Every prisoner they found was killed.

Nessy eventually emigrated to the United States and Knoxville, Tennessee where she dedicated her life to sharing about her experiences during the Holocaust