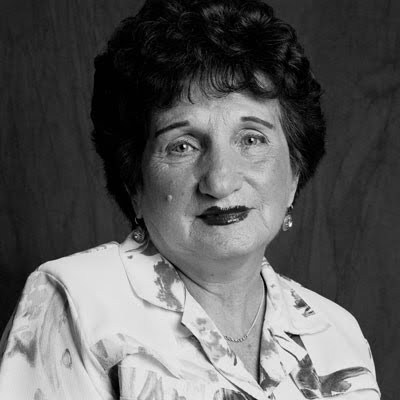 Paula (Berkensztadt) Kelman was born in Czestochowa, Poland. She was one of five children.

On September 1st, World War II began. The Germans invaded Paula’s home, forcing her family out in the middle of the night. Paula and her family were taken to the Czestochowa Ghetto and forced to live in one room-- Paula’s childhood ended that night. Paula and her family were forced to work day and night. Paula’s parents and three of her siblings were eventually selected to go to Auschwitz and sent to their deaths upon arrival. Paula’s oldest brother tried to go into hiding with her but her oldest sister did not allow this. Paula’s oldest brother and the woman with whom he was hiding were exposed and killed by the Nazi authorities.

1940-1942: When Paula and her sister were called up for Selection, Paula’s sister cut her pigtails, painted her lips and placed her in high heels. When the guards asked Paula how old she was, Paula responded “18”. This saved her life. Paula’s job in the ghetto was to go to the homes of deported Jews and prepare their personal belongings to send to Germany. To survive the ghetto conditions, Paula removed her Star of David and left the ghetto to buy bread, risking her life for food. As the ghetto became smaller and more people were removed, Paula wrapped herself in sheets and linens so that she could sell them outside of the ghetto in exchange for food. She was caught by a Jewish policeman. He faked their deaths in order to save them. Later that year, some young men in the ghetto attempted to kill an SS soldier but did not succeed. In response, the Nazi guards shot twenty boys; everyone was forced to witness their deaths. During this time, Paula’s sister became pregnant but Nazi soldiers discovered the baby and murdered it by throwing it up against a wall while Paula and her sister watched.

The HASAG Munitions Factory was built and opened in Czestochowa. Paula began working in the factory, making bullet castings. The workers were often beaten if they didn’t make the required number of bullets and Paula recalls that she was never called by her name but instead, the number 1585.

Paula was liberated by the Russians and reunited with her sister.

Paula, her sister, and her brother-in-law left their apartment in Poland and moved to Germany where they lived in the Bergen-Belsen Displaced Person’s camp. Paula met her future husband in Marburg, Germany.

Paula married a survivor of the Auschwitz concentration camp.

On January 15, Paula and her husband moved to Memphis, sponsored by the Hebrew Immigration Aid Society.

After keeping her memories locked inside for many years, Paula became a speaker to students and community groups in the Memphis area about her experiences during the Holocaust, finding it "healing."