Please listen to Robert Mamlin’s video story. In this source, Mamlin expresses several central ideas. After you have listened to his story, determine one central idea in the video and write an essay that both summarizes and analyzes how Mamlin develops that central idea over the course of the video. Be sure to cite specific evidence to support your analysis.

At 1:40 in the video, Robert Mamlin speaks about the Germans fearing General Patton’s arrival. Below is a photograph from the USHMM photo archive depicting Generals Eisenhower, Patton, and Bradley wiewing corpses of inmates at Ohrdruf, a subcamp of Buchenwald. Germany, April 12, 1945.
Write an essay that compares and contrasts these two sources (Mamlin's testimony and the photo) about the role that famous US generals played in telling the world about the Holocaust. Include an analysis of each source’s point of view and the extent to which the evidence provides support to these points of view. Be sure to cite specific and thorough evidence from both sources to support your analysis. 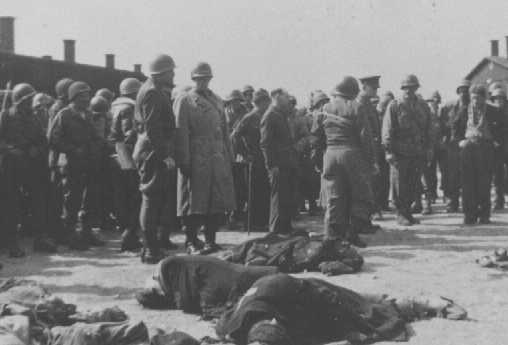