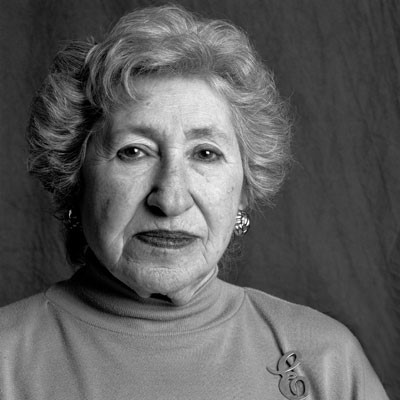 “Survivors were reborn through freedom. We have a commitment and promise to fulfill. If we stop remembering, then six million Jews will have died in vain,” states Esther Loeb, whose family escaped to Russia from German-occupied Poland, only to be sent to Siberia. ”

Esther grew up near Danzig, where residents were bitterly split between German and Polish national identities. As she tells it, “They were always fighting each other, but they blamed the Jews for the civil unrest.”

In 1939, following the Nazi invasion, Esther and her family fled east. At the Soviet border, small boats carried refugees across the river. Esther’s family boarded, but her mother was pulled back. Esther continues, “My father begged to switch with her. He kept shouting to let him get off and let her go instead, but the boat pulled out leaving her behind.” In Ukraine, they were robbed and had to go door to door begging for shelter. “Then,” Esther recalls, “out of nowhere, my mother found us. Her legs were swollen from walking for miles in sub-zero temperatures.” They lived in a barn for two weeks before the Russian Army found them and dispatched them to Siberia. Esther’s father suddenly fell ill and died. Her pregnant mother gave birth to a boy who died of starvation before his first birthday.

In 1942 Polish civilian prisoners of war were granted permission to move freely within the Soviet Union. Esther and her sister sold stolen potatoes for train fare and took their mother to central Asia, where they found farm and factory work. At war’s end, they returned to Poland, found no living family members, then left to create new lives in the West.