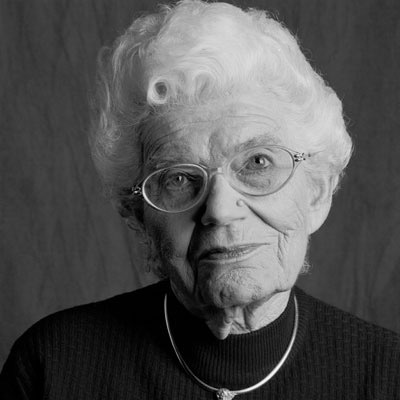 Herta attended school where, during the morning class, students and teachers were asked to raise their hands to give the “Heil Hitler” salute. She never raised her hand and was never asked why she did not. The school that she next attended supported Hitler Youth and the teachers were SA men in uniforms. These were the Sturmabteilung, the Storm Detachment, also known as Storm Troopers or Brownshirts, the early paramilitary wing of the Nazi Party. Herta was asked to leave and was then admitted to a school in Limburg an der Lahn, (the School of Mary of the Poor Maids of Jesus Christ). Herta was left alone during lunch time, very isolated at her new school. It took some time before the other young women would finally talk to her, eventually realizing she did not have horns and indeed was human. Being from a very orthodox family, Herta walked to school on Saturday through the snow and woods of Germany.

November 9-10: During Kristallnacht, the synagogue Herta’s family attended was burned. Herta heard the news, went outside, and witnessed the act. As she stood there, a man remarked, “It’s a shame. This is the house of worship. This is the house of God and that shouldn’t happen. I know Jewish people and they’re such nice and good people.” The woman besides him responded, “They are no good, and a Jew is a Jew like a herring is a herring.” During this time, Herta’s parents were in Portugal with her brother who was traveling out of the country on business. The family had left Herta in Germany assured by the fact that she had a quota number to travel to United States. However, once Kristallnacht occurred, it became increasingly difficult to leave Germany.

January: Herta received permission to enter Italy. Upon leaving, the German police inspected her personal belongings and opened her bag, which contained a box of candy that had been given to her. The SA unwrapped each piece to ensure there were no diamonds or gold in it. She traveled from Germany to Switzerland, to Italy, and then traveled to Portugal, where she stayed with her parents for six months.

She traveled from Germany to Switzerland, to Italy, and then traveled to Portugal, where she stayed with her parents for six months.

Herta eventually journeyed from Portugal to Italy and then to United States. She feared her ship might be sunk. (A ship had recently been sunk by the English, who thought that it had German spies amongst the passengers.)

Herta met her future husband, a man who had left Europe in 1933 and was a practicing doctor in the army. She married Dr. Justin Adler and moved to a military base in Springfield, Missouri.