Jack states that out of 2,217 Jews in his town, only 17 survived. He said, “I was a child, but I was never a child. Take my word for it. I learned to survive before I learned the ABCs. If you didn’t, you didn’t survive.” After viewing Jack’s documentary, write an essay that both summarizes and analyses his attitude about loss and childhood during the Holocaust. Be sure to cite specific evidence to support your analysis.

Synthesize the three sources (Jack’s testimony, the photograph, and the Einsatzgruppen historical background) into an essay that summarizes and analyzes the impact of the Einsatzgruppen experience in eastern Europe. Draw evidence from the three sources to support your information and be sure to cite strong and thorough evidence to support your argument. 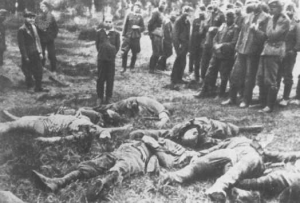 Image of a concentration camp

Members of an Einsatzkommando (mobile killing squad) before shooting a Jewish youth.  The boy's murdered family lies in front of him; the men to the left are ethnic Germans aiding in the squad.  Slarow, Soviet Union, July 4, 1941.
- Dokumentationsarchiv des Oesterreichischen Widerstandes