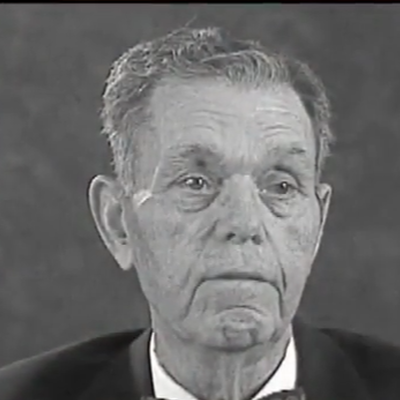 April 24: John Lassing, Jr. was born in Nashville. He was of Scotch-Irish and German descent and was a Methodist. His father was an oil distributor.

John’s father knew that England was at war with Germany, so he sent John to Columbia Military Academy in Columbia, Tennessee, a military prep school, in case he was drafted. His father thought that with prior training, John would be able to get a commission in the army.

December 7: John was a senior at Columbia Military Academy on the day of Pearl Harbor.

John was working in his father’s plant, but then volunteered to be drafted early. He was inducted into the Army at Fort Oglethorpe, near Chattanooga; traveled to Camp Shelby in Hattiesburg, Mississippi for basic training; then went to Camp Gordon in Augusta, Georgia. He took a test for an engineering school program at Georgia Tech, but was not placed there. He then was assigned to Fort Bragg, North Carolina, where he was trained as a combat medic. They gave him a ten-day furlough and then sent him to Camp Gilmore in New Jersey to be sent to Europe.

June 6: John was sent to France as part of the 79th Infantry Division. He arrived on the coast of Omaha Beach in France where he began pulling wounded soldiers out of the water. He was then reassigned to the 2nd Armored Division.

December 25: John’s division took over Bastogne, Germany. His group was told to stay to protect the area in case the Germans tried to take it over again. His division moved through Hurtgen Forest, to help with a skirmish against the Germans.

They continued east towards Germany, through Chartres, Paris, Fontainebleau, Nancy, Épinal, Baccarat, Strasbourg. There they were attached to the Third Army, led by General George Patton. They then went through Colmar. After that they crossed the Rhine River at Mannheim. They went into Heidelberg, and then toward Munich.

April: John went to Berchtesgaden and made his way to Dachau, a small town 60 miles from Munich.

No one resisted in Dachau. They heard of an encampment two or three miles outside of town, which was Dachau Concentration Camp. John’s troop was one of the first to go into Dachau. The Wehrmacht (German Army) had lost all their zeal for fighting. But, there were still some SS troopers who were fanatical “black boots,” that wouldn’t give up. His group was determined to go into the camp, regardless of the SS troops that might be there. When they first arrived, there was machine pistol fire out of the guardhouses from the SS. They saw the gate with a sign over it that said: “Work shall make you free.” One of the combat infantryman yelled, “We need medics,” so they entered the camp. John saw 28 gondola-type railroad cars filled to the brim with dead bodies. Then he saw a starving man, who pulled the leg of John’s pants. He was shocked at the man’s condition, and gave him a chocolate bar he had in his pocket, which the man wolfed down, but then threw up. John brought him water and tried to convince him to slow down. As they continued through the camp, they witnessed bodies all around, and starving people with haunting eyes. He saw bodies of people who were ill, or in the barracks in beds, unable to get up. There was a horrible smell, both from the dead bodies in the rail cars, and from the crematorium, where they burned dead bodies. Some of the bodies that they thought were dead were not. They would have to go onto the pile of dead bodies and look for those who were moaning, and alive.

John’s division stayed nine days because they were the medics. They tried to get the freed prisoners tetanus shots, food, and medical supplies. They were lethargic from lack of food, so John and the other medics spent a lot of time feeding them half rations. By the time they left, there was a kitchen. The freed prisoners were in a mess line and grinning from ear to ear. No matter how sick they were, they were still free, and being fed, and that’s really all that counted. His group took pictures of what they saw there.

After returning home, John found himself unable to talk about the events he witnessed. His wife, Betty, was skeptical of what he had told her about what he had seen, so John took her to the site of the Dachau Concentration Camp to show her what he had described. He remembered all of the details of what the camp looked like, but it looked different because it was now a memorial. After she saw the camp, Betty encouraged him to speak out about what had happened during the Holocaust.