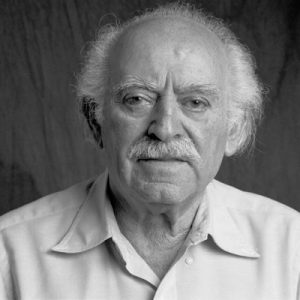 When the war started, Mark’s family evacuated to the east, but were unable to catch a train. Mark’s father got a horse and buggy, his grandparents and his parents rode inside but they did not get far. His mother at the time was extremely ill with tuberculosis. They were able to move 80 kilometers, then she started bleeding. She was put in a hospital and because of this they were unable to escape.

While traveling back home they stopped at a house belonging to friends of his parents. A policeman in front of the house grabbed his grandfather’s head, pulling it and dragging him by it. Mark’s grandfather began to scream and in response, Mark’s father and Mark got out of the house to save him. The policeman left the grandfather alone and began hitting the father. Arriving back home, they were surprised the see the Russians greeting the Germans with bread, salt and shoe polish.

Their house had been turned into a cafeteria by the Germans and so they moved in with some neighbors. Some of their items had been stolen, although Mark’s father was able to salvage a few items.

They moved to the Mogilev-Podolskiy Ghetto. As the ghetto began forming, Jews from different areas began to appear and a gate was built. Both Jews and Ukrainians lived in the ghetto.

September: After a flood came to the ghetto and people were forced onto their roofs, Mark’s mother died. All the Jews wore black coats with a yellow Star of David on the back. Being still a child, Mark didn’t have to wear one. Mark’s father was an infection disease doctor, so he wore a white strip with the word “Doctor” on his sleeve. He treated anyone who was sick, whether Jewish or not, and was able to leave the ghetto to treat patients. Mark's father was afraid of punishment, so he went around with a Romanian teacher, Ivanov, who during the time of the occupation, was helping the Jews. At that time Romania controlled the area, collaborating with Nazi Germany. Mark's father saved a lot of lives, and because of this, his family survived.

March 19: The Russian Army occupied the town and liberated those in the ghetto.

Mark came to Tennessee to be closer to his family.