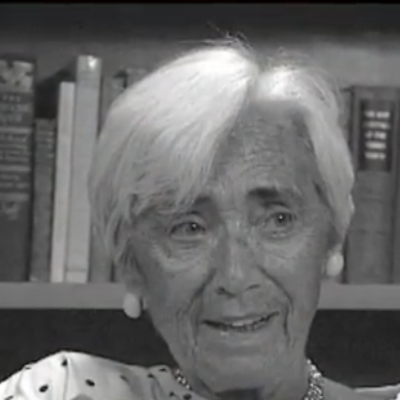 “I came home and I said to my parents, ‘I’m going to leave.’” While visiting friends in Berlin, twenty-year old Blanche Levison heard Nazis singing, “If Jewish blood splashes from the knife, everything goes twice as well.”

Hearing this, she wanted to emigrate to Palestine. Persuaded by her parents, she moved to Belgium instead. There she married Albert Stern, and they had a son, George, in 1937. When the Levison family business in Frankfurt was closed and all assets confiscated by the Nazis, Blanche’s parents joined them in Brussels. But May 10, 1940, the family woke to find Belgium invaded by Germany and Jews being arrested.

They began an exhausting, frustrating, determined journey to freedom, crossing the border to France during the Battle of Dunkirk. Their German papers meant arrest and separate detention when they reached France. Blanche’s father was returned to Belgium and her mother followed. A bribe allowed the Sterns to reach Spain. There a stranger offered them Matzos smuggled from Tangiers, Morocco, saying “At least, I want you to know that it’s Passover.”

After many failed attempts to reach the United States, the Sterns were able to obtain visas to Cuba and from there to the United States, with the help of Mortimer May, Blanche’s uncle in Nashville. The city became home in June of 1941 as Blanche and Albert found work. Unknown to the Sterns, Blanche’s parents were alive in Belgium. They hid in an attic room for a year and a half. In 1945 Mr. and Mrs. Levison were found by Blanche’s brother and reunited with the Sterns in 1946.