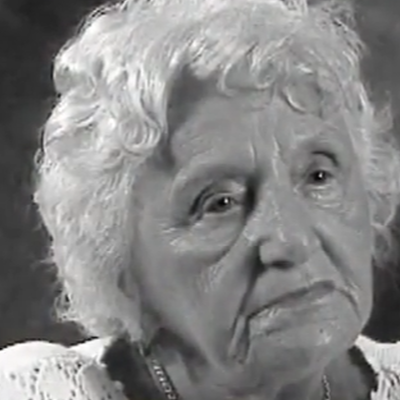 Elsa Herzfeld Frank was born in Hochst im Odenwald, Germany. Elsa was an only child, who remembered peacefully co-existing with her neighbors who were Protestants and Catholics. She swam in the Mümling River and belonged to a girl’s club, where she later became a leader. Her father belonged to a bridge club, and her mother belonged to a little Kaffeekränzchen, where they had coffee and gossiped. Her father played violin and harmonica, her mother sang and Elsa played piano. There were about twenty other Jewish families in their town.

1918-1929: Elsa took a train every day to a private school for girls where she learned German, history and algebra, as well as French and English. There were two other Jewish girls in the class. After she graduated, she attended business college, which she finished in two years.

Elsa worked at a tire factory as head of the payroll department. The factory was owned by Jews in Frankfurt.

December 31: Elsa’s father leaves the synagogue and is harassed by young men making antisemitic remarks. A friend who had just come out of church confronted the young men saying, “Max (Elsa’s father) and I have prayed to the same God. Maybe he will forgive you, but I cannot.”

Jacob May, who lived in Nashville, was visiting his brother, and invited Elsa to come to the states, but she hesitated to leave her parents or Germany.

Elsa’s mother died. Elsa’s best friend, Kada, saw Elsa but did not speak to her about her mother’s death.

Elsa decided to leave Germany, even though she was engaged and didn’t know if she would ever see her fiancé again. She contacted Jacob May, who sent her an affidavit. She left for the United States.

June 1937: Elsa arrived in New York. Two weeks later, Jacob May and his daughter-in-law came to pick her up. Elsa and the Mays took a train from New York to Nashville. Jacob gave her a job in an office.

While having Shabbat dinner with the May family, Jack asked if she had a boyfriend. She said she did, but that he was in Germany. Mortimer May offered to sponsor his immigration to the US.

Elsa’s fiancé arrived and they soon were married. He worked in the May Hosiery Mills for a short time, then sold Electrolux vacuum cleaners, and then had a little store where he sold ready-to-wear.

Elsa’s father, Max Israel Herzfeld, was sent to Theresienstadt, where he was killed.

Elsa’s husband died of a heart attack, leaving her to raise her two children on her own. Elsa worked at Kroger for twenty years.

Elsa returned to Europe, traveling first to London, and then to Frankfurt. She went by train to Hochst. The closer she came, the more upset she became. Everything was the same in her hometown, from the the train station to the children carrying books waiting for the train. She went down Bahnhof Strasse because she wanted to see her mother’s grave. She arrived at City Hall, where she met the new mayor, who gave her a book that he inscribed “in deepest remorse” and told her that he was never a Nazi. The mayor’s secretary called her mother, who knew Elsa, to tell her that Elsa was in town. By the time she came down the steps of City Hall, half of the city’s inhabitants were there to welcome her. They were so happy that Elsa had come back and asked her about other Jewish people they had known. She even met her childhood friend, Kada, who apologized for her behavior.

She told the mayor that she wanted to see the cemetery. He helped her find her mother’s gravestone. It was still there, unharmed.