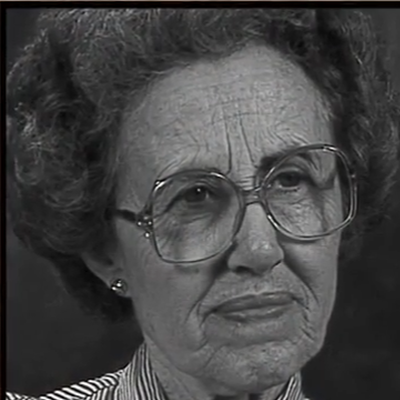 Elsa May Herzfeld was born in Saarlouis, Germany.

Elsa and her family had moved to Erfelden am Rhein, fifteen miles south of Frankfurt. Elsa lived with her father and mother and her younger brother, as well as her maternal grandmother. Her maternal aunt lived on the North Sea, so her grandmother would spend summers there.

Businesses owned by Jews were boycotted and because of this, Elsa’s father’s business suffered and soon had to be closed. Elsa’s friends who were non-Jewish stopped associating with her. Jews were no longer allowed to go to the opera, to concerts, and were banned from stores and pools. Elsa’s parents owned an apartment house. One of their tenants worked for the Gestapo, the official secret police of Nazi Germany. Because of this, they gave the tenant anything he wanted, in fear that Elsa’s father would be arrested and sent to a concentration camp for not cooperating.

Since there were no high schools in Erfelden, Elsa and her family moved to Darmstadt at the end of the year.

Elsa attended a business college, and then a convent school to learn how to sew and make patterns.

March 26: Elsa left Germany four weeks before her parents and brother because her passport was set to expire in April.

April 2: Elsa arrived in New York City. A young man she had dated and two women from the National Council of Jewish Women picked her up from the dock. They gave her a room with a German-Jewish family in Manhattan.

April 20: Elsa’s parents arrived in the United States and were reunited with Elsa. They were able to bring out clothes and furniture in a lift box. They could bring items out, but no money. Elsa’s family smuggled Leica cameras out of Germany to sell. Only a few were sold, but it was enough to buy food. When her family arrived, one of the children of the German-Jewish family had the measles, so Elsa’s family found other arrangements. After a night in a small, cramped hotel, they found a family able to rent them a room and provide meals.

May 10: They arrived in Nashville, Tennessee and met with their friends Mortimer and Gertrude May.

Elsa’s family stayed with their friends Lilly Levy and Erna Preis, who were family members of Mortimer and Gertrude, and had lived across the street from them in Germany. Elsa and her father worked in the May Hosiery Mills’ offices. Later, Elsa’s father was asked to sweep floors in the factory, which was demoralizing, so he quit and became a peddler.

Elsa loved opera, so she went to Chicago to see performances. She attended opera for seven days, and then decided to stay. She lived with a family friend and worked at an office doing payroll. She was accepted by the community of German-Jews. There she met her husband, John Herzfeld. After dating for a while, John was drafted into the army and sent to the Pacific.

John returned from overseas in the Pacific and they moved to Nashville.

Elsa’s father, Isidore May, died, leaving her as the main caregiver for her mother.

Elsa’s mother, Selma May, died at the age of 91 years.

You can view her obituary at the link below: http://www.legacy.com/obituaries/montgomeryadvertiser/obituary.aspx?pid=161097460