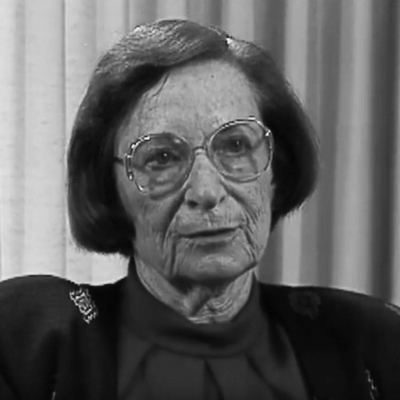 Frieda’s older brother emigrated to Buffalo, New York, with some aunts and uncles feeling that the University in Jena was too anti-Semitic at the time.

The SS troops stood in front of department stores or Jewish businesses, telling bystanders not to come in. Frieda’s father was asked to leave his position. Parades and marching on the streets was done publically in the name of Hitler. Frieda and her sister were no longer allowed to go swimming or attend the tennis club. One of the teachers in Frieda’s school who was also a professor at the university lost his position because he refused to say “Heil Hitler” when entering the classroom. Frieda’s sister began studying medicine at the University of Jena.

Frieda’s sister was not allowed to take her final medical exam because she was Jewish.

Frieda and her sister left for the United States and joined their brother in Buffalo, New York. Frieda’s parents stayed in Germany.

November 9: During Kristallnacht, Frieda’s father was arrested and taken to Buchenwald; her mother convinced the guards to let him go by showing he had affidavits to go to United States of America. He was held for 10 days and then released.

June: Before the war broke out, Frieda’s parents finally joined them in the United States in Buffalo, New York.

Frieda went to business school in Buffalo, later moving to New York City, where she met her husband, Jack. They married in New York.

They eventually moved to Virginia to begin a business. They soon sold the factory in Virginia.

They moved to Nashville, Tennessee, close to their new plant in Smithville, TN.