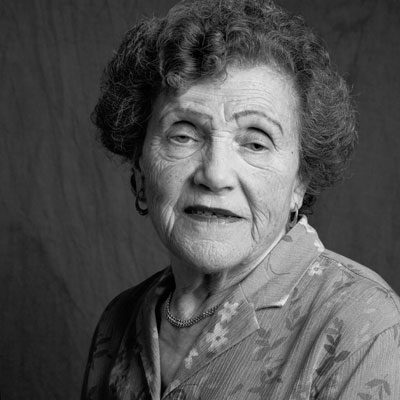 May 1: Lodz Ghetto was closed. No one was permitted to enter or exit. Frieda lived in the ghetto from 1940 until 1944. During these 4 ½ years, she worked a variety of jobs, including making straw shoes.

Lodz Ghetto was liquidated in August. Frieda was among the Jews told they were being taken to another ghetto, but they were deported to Auschwitz. August: Upon arrival at Auschwitz, Frieda was separated from her mother. It is the last time Frieda saw her mother, who was sent directly to be killed.

Frieda was transferred to a work camp in Kristianstad, Germany after spending three days in Auschwitz.

Frieda was sent to a different work camp in Parschnitz, Czechoslovakia.

May 9: Frieda’s camp was liberated by the Russians. She was sent to a Displaced Persons Camp.

Frieda met her future husband, Sam, in the displaced persons camp. They were married in 1946. Shortly after their marriage, Frieda and Sam emigrated to Memphis, Tennessee, where Sam got a job in a furniture factory.