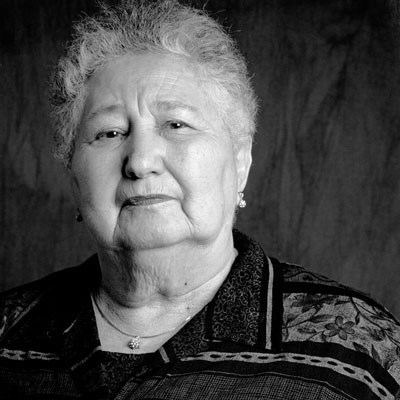 Gertrude Jakubovitz Schlanger was born in Sobrance, Czechoslovakia (from 1939 until the end of the war, it was part of Hungary, but today is part of Slovakia). She had three sisters and four brothers. Gertrude’s father delivered food in a horse-drawn van. They were an Orthodox family.

Gertrude’s family was confused by the way their neighbors treated them, because they had always been kind before, but their attitudes had changed. Her family was then placed in the Uzhhorod (Ungvar) Ghetto.

May: Gertrude and her family were moved from the Uzhhorod (Ungvar) Ghetto to Auschwitz, Germany by the Nazis. Once they arrived at the Auschwitz Concentration Camp, Gertrude’s family was separated. Men and women were pulled apart and sent to separate parts of the camp. Gertrude did not know that this would be the last time she would see her brothers, older sister and mother. Her brothers were twelve, ten and eight years old. Her older sister was married and had a baby. Gertrude was able to stay with two of her sisters, but the rest were taken to the gas chambers. They saw their father through the electric fence of the camp. He told them to eat whatever was given to them, even if it wasn’t kosher, because if they didn’t, they would not survive. She never saw him again.

Gertrude and her sisters were told that if the worked, they would have better food and good drinking water. Their job was planting potatoes for German families. She witnessed one of the workers eating a raw potato in order to survive. She said, “How can you eat a raw potato?” The woman said, “I’m hungry. I got to put something in my stomach so I eat the raw potato.” Gertrude was always hungry, but she never would eat a raw potato.

Gertrude and her sisters were moved to another camp.

January: There were rumors that the Russians or the Americans were close. Anxiously the prisoners waited for someone to come and save them. Then they were told that they would be marching to Theresienstadt Concentration Camp. The prisoners began walking, and spent their first night in a barn. The next morning, Gertrude and her sisters hid in the barn with twenty-two other women prisoners, underneath the hay. After the other prisoners left, a woman locked the barn door, but the twenty-two women escaped through a window and started home. Gertrude and her sisters walked all the way to the train station to go back to Czechoslovakia. No one asked them to pay for the train ride. They were given food and a little money, because others could see by their clothes that they had been in the concentration camp and people wished to help them.

They were the first Jews to return to Czechoslovakia. When they arrived home they found that the neighbors had taken their furniture and other belongings. But, because the neighbors feared repercussions, their belongings were returned.

Gertrude got engaged to her husband, Aron Schlanger, in Sobrance, and then moved to Italy and was married. There she gave birth to her daughter as they awaited visas.

When her daughter was eight months old, Gertrude, Aron and her daughter took a ship from Italy, moving to Bristol, Connecticut. Gertrude had an uncle who lived there. A week after they arrived, he asked if his daughter could raise the baby, but Gertrude refused to give her daughter up. So, Gertrude and her family moved to Nashville, Tennessee, where her husband’s relatives lived.

You may view her obituary by clicking the link below: http://jewishobservernashville.org/2015/12/31/sympathy-january-issue-2016/