Early in the video and again around 6.5 minutes, Lowenstein discusses the passivity of people in Germany, careful not to assign blame. Martin Luther King, Jr. said that "Our lives begin to end the day we become silent about things that matter." It's interesting that Lowenstein makes the point that his fellow citizens, while not necessarily taking an active role in his demise, were silently responsible, and this is in stark contrast to the way in which he was saved. Through the Kindertransport, residents of another country, completely separate and unrelated to Germany, stepped up and saved the lives of thousands of Jewish children. What sort of societal values must be in place for a rescue of this kind to take place? After viewing Herman’s documentary, write an essay that both summarizes and analyses his attitude about the issue of bystander behavior in Germany. Be sure to cite specific evidence to support your analysis.

Lowenstein mentions briefly the role of propaganda in connection with his story about a family member being told they didn't need a doctor, but a veterinarian. Analyze the antisemitic poster below. What stereotypes are being perpetuated? What is the intended message of each piece? Be sure to cite specific evidence to support your analysis. 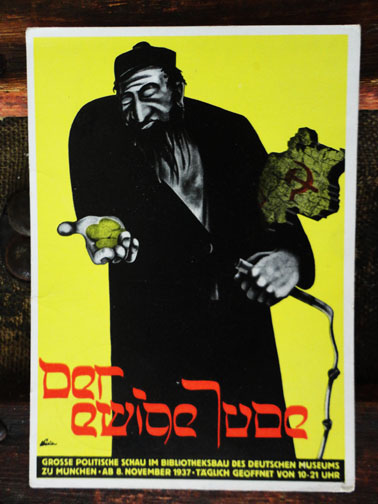 Mjölnir [Hans Schweitzer], poster for the film Der Ewige Jude The Eternal or Wandering Jew, directed by Fritz Hippler, 1940. As part of its heightened wartime attack on Jews, the Ministry of Propaganda turned to motion pictures as a medium for antisemitic messages. Der ewige Jude, directed by the head of the Propaganda Ministry’s Film Division, was billed as a “documentary on world Jewry” that aimed at unmasking the alleged pernicious influence of the parasitic Jewish race on German society. Despite Goebbels’s efforts to promote it, the film was a box office failure.–US Holocaust Memorial Museum, courtesy of Museum für Deutsche Geschichte