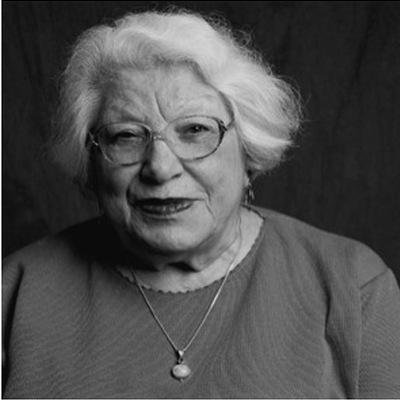 “I was there long enough. Long enough to see the misery and lose my parents and my brothers.” After Germany invaded Hungary in 1944, Matilda and her family were taken to the Mateszalka ghetto for a few weeks and then to Auschwitz. ”

Transported again for work at an ammunition factory in Geislingen, Germany, Matilda stayed bound to her two sisters. “We took care of each other. With scraps of food or just faith, we held on to each other. We did it every day. We survived the war together,” she says.

One night as Allied troops closed in, the factory was bombed. Germany was losing the war and closing the camps, which pushed thousands of inmates into already impossible living conditions. On a train to Dachau, Matilda heard a voice pierce the darkness: “The Americans are coming.” Tearfully she recalls, “The Americans were coming.” Out of fear, the guards abandoned the train. Matilda remembers the chaos as prisoners delirious from starvation raided the food car.

After liberation, the sisters returned to Hungary. “But we came home to no one and nothing,” according to Matilda. The family home stood empty, furnishings pilfered. No one else returned. They left their homeland and never went back.