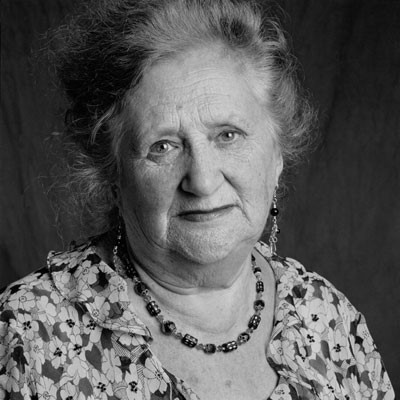 Olga Borochina was born in Mogilev-Podolskiy, Ukraine. Her mother was a nurse and her father was a doctor.

Olga’s father was sent to assist in the war of Finland as a military surgeon. She never saw him again.

Upon hearing that the Germans planned to occupy the Ukraine, Olga’s family tried to take a train to escape to Moscow, Russia, but the train was so full it became impossible. They tried to go with a horse and buggy but about five families occupied the buggy and so they were forced to walk. Soon afterwards, Germany occupied Ukraine and escaping seemed impossible.

As the Germans come through the town, the Rabbi and religious Jewish people offered the soldiers bread and salt, in the hope it would nurture a sense of kindness toward the giving community. Instead, the German soldiers pulled their beards, shaved them and shoved the men into the ground.

Upon returning to their home they found it stripped of personal belongings and occupied by Christians. Every Jewish family had lost their home.

Construction of a wall barricading a third of the city made it into a ghetto for the Jews. There are no houses or apartments there in which to live. Instead, Olga’s mother, sister, grandparents are forced to sleep in a barn with goats. At times snow fell into the barn, and people froze to death over night. People had lice from sharing pillows, blankets and clothes. The lice carried diseases that killed some of the people.

Olga’s grandparents died from starvation and the harsh living conditions.

Olga’s mother and sister worked cleaning the police station and cafeteria. They stole potato peels in order to feed the family. Olga went to mills, begging for food.

A rumor spread that liberation was coming, but also of a van with a gas chamber coming to kill the survivors. Afraid and not knowing what will happen, Olga and her family dug a hole and hid in it for three days. When they heard bombs, they realized they were free.

The family was placed in the hospital for two weeks. They lived in government-owned apartments. Later they received a letter telling of Olga’s father’s death and his service to the Russian army.

Olga became a doctor, but because of continued antisemitism the family decided to emigrate to Memphis.