1. Sally states in her interview that after Germany took control of Poland the Nazis immediately began mistreating the Polish Jews, “We were just scared, scared like animals.”

Students work with a partner to answer the question: Other than what you may know of Nazi acts, what actions do you think strong or majority groups of people use to control or intimidate minority or weaker groups of people?  List at least five actions and then come together and compile a classroom listing. What similarities and differences do you see?  How do these compare with the practices of the Nazis toward the Jews?

2. Sally and her family were moved to the Lodz Ghetto—the second largest after the Warsaw Ghetto—and the family members were sent to work. The Lodz ghetto was divided into three sectors by two major thoroughfares which passed through, but did not belong to the Jewish district. The photo below shows a “walkway” that Jews were made to use when going in and out of the Ghetto to the various work places in the city of Lodz. Discuss what the purpose of the walkway really was from the point-of-view of the Jews. How did this support the Nazi propaganda about the Jews to the non-Jewish residents of Lodz? 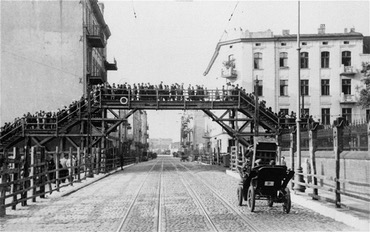 3. Secure a copy of My Secret Camera, by Mendel Grossman and Frank Dabba Smith. Grossman secretly took thousands of heartrending photographs documenting the hardship and the struggle for survival woven through the daily lives of the people imprisoned with him in the Lodz Ghetto.  Create titles or captions for each photograph. Share them with the rest of the class and explain how you decided on the particular title or caption.

4. After being taken from the ghetto to Auschwitz, Sally and three of her sisters were then moved to an airplane manufacturing facility in Freiburg, Germany. All four girls worked at the factory because they could “read and write.” Why did the Nazis use the girls in this capacity given the importance of airplanes for the German war machine? Discuss some of the ways that this was a dichotomy of thinking on the part of the Nazis. For example, Nazi propaganda stated that Jews were not smart or valuable to German life and yet the work surrounding the manufacture of airplanes would have been very important to success on the battlefield. What does this say about the fallacy of propaganda?

5.  Sally ended her interview with some details about re-connecting with Henry, getting married, and then coming to the United States. She recalled happy times and the wonderful childhood and family life that she and her eight siblings enjoyed with their parents before the war. Discuss the importance and value of remembering “the good times” in a person’s life. What positive feelings come from memories of days gone by? How do these memories help in difficult times? What responsibility does each of us have in our own particular family to be a catalyst for future “fond memories?”