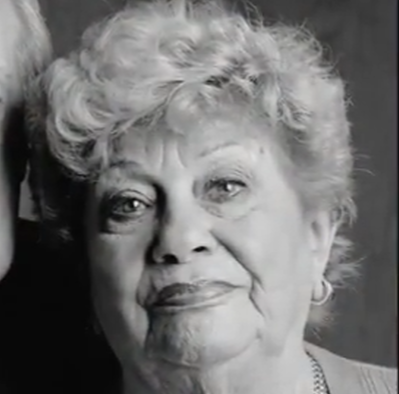 While Sally was walking in the street with a friend, they heard sirens and planes overhead; they began running. They knew that the war was starting. After five days, the invasion was over and the Germans came in with tanks. Jews went into hiding in an effort to protect themselves. Sally, the second oldest of nine kids, tried her best to make sure they all stayed together. Sally’s brother planted some vegetables in the garden in order to have food.

Sally’s family was sent to the Pabianice Ghetto, to work. Sally worked in a ladies’ clothes factory, where he was paid with small amounts of food. While in the ghetto, Sally met a neighbor named Henry and the two became friends. Sally’s younger brother was then sent to Lodz. Her brother volunteered to go to Lochow to work, but was killed.

Sally’s family was sent to Auschwitz where they were separated. Sally never again saw her mother nor some of her sisters.

Soon afterward, Sally and her four sisters were sent to a camp at Freiburg, near Munich, to work in an airplane manufacturing business. Because they could read and write, a German soldier gave office jobs to Sally and one of her sisters. Two other sisters worked night shifts in the airplane factory.

April 12: Sally and her sisters were taken by train to the Mauthausen Concentration Camp. When they arrived, there were many corpses lying on the ground. The Red Cross had food for the newly liberated survivors; however, many became sick from too much food and Sally contracted a devastating bacterial infection.

After recovering, Sally and her sisters went to Poland, where she saw Henry again. He asked her to marry him and the couple wed two weeks later.

Sally and Henry traveled to Germany to immigrate to the United States, because Sally’s uncle lived in New York. They went to New York initially, but moved to Chicago to be with Henry’s uncle.

Sally and Henry moved to Nashville to be near Sally’s sister.