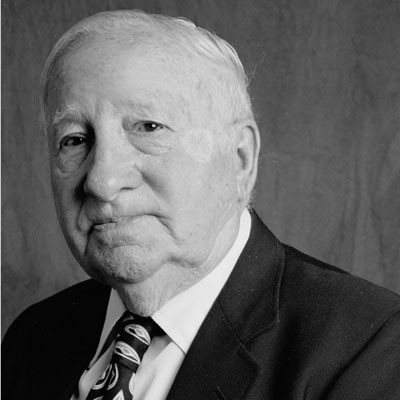 Sam’s father and older brothers owned several furniture and antique stores in Lódz. Together, they owned four stores across the city.

September 1: World War II began. Sam was designated as watchman at the front of the tenement house where his family lived.

September: During the second night of the war, a man on a bicycle told Sam to warn everyone that the Germany army was coming. Over the next two to three days, Sam and his younger brother made their way to Warsaw to stay with their grandfather. Two weeks later, Warsaw fell under Nazi command; Lodz was also occupied by the Germans.

The Germans came to Sam’s father’s store and took nearly everything without paying. The family hid three cases of valuables so they could be retrieved at the end of the war.

The Lódz Ghetto was established. Sam and his family were forced to leave their homes and were designated one room. During this time, Sam worked at a furniture factory and his father sold wood acquired by chopping up old furniture. Two of Sam’s sisters married and moved to another ghetto, along with a younger brother. The family received rations that were meant to last two weeks, but the food was only enough for approximately three days.

May: The ghetto was sealed. Sam’s 13-year-old sister, his mother, and his older brother eventually died of starvation.

The Germans liquidated the Lódz Ghetto. Sam, his older sister and father were the only ones left of their family. Willingly, Sam went to Auschwitz, believing there might be something better for able-bodied workers. His sister refused to leave their father and stayed. The Germans told Sam he would receive more food. After facing Dr. Mengele during selection, Sam was sent to become a worker.

After three days in Auschwitz, Sam was transferred to Kaufering, a branch of the Dachau Concentration Camp. While there, Sam’s jobs included carting the dead bodies and building an airplane hangar. He also visited doctors in their tents and sang to them for an extra piece of bread, which helped him when he contracted typhus.

As the Germans evacuated the camp, prisoners were forced off the transport trains when bombs began falling. Sam and another young man hid in the forest for two days and were liberated by an American soldier. They were then moved to Landsberg am Lech, a displaced persons camp.

With the help of the Jewish Federation, Sam and his wife, Frieda, moved to Memphis. They traveled from Landsberg am Lech to Bremen Harbor and then took the General Taylor ship to New Orleans. From New Orleans, Sam and Frieda traveled by train to Memphis, Tennessee.

Sam retired after 15 years as superintendent of maintenance construction with Belz Enterprises.

August: Sam returned to Poland, and with other survivors commemorated the sixtieth anniversary of the Lódz Ghetto’s liquidation.