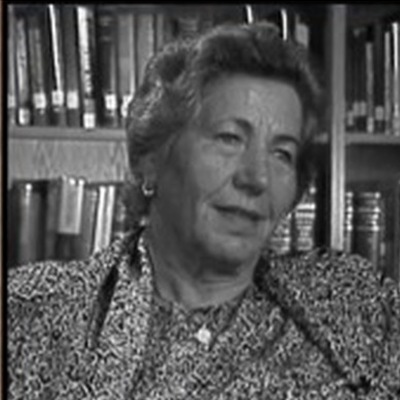 Sara Slomovic was born in a small town in Czechoslovakia, where she had a happy childhood in a rural setting, interacting with Jews and non-Jews.

The German occupation of Czechoslovakia began with the annexation of the Sudetenland, under the pretext of “ethnic Germans” suffering discrimination. After the Anschluss, Hitler sent the Wehrmacht to annex the remainder of Czechoslovakia.

Sara’s life changed with German occupation. She and her family were deported to the Sekernice Ghetto on trucks and made to wear the yellow Star of David. Sara described daily life in the ghetto as “bitter” and saw Jewish men having their beards cut.

One of Sara’s sisters was killed in Poland by Germans, along with her husband and four children.

Sara and her family were deported to Auschwitz from the Ghetto by train where they were forced to surrender all belongings. Sara was separated from her parents upon arrival at Auschwitz, and never saw them again. Sara and her sister Lea survived for 6 months at Auschwitz and volunteered for a work detail. They were taken to Danzig and worked on constructing an airport, demanding physical labor with little food provisions.

As the Soviet army advanced toward Danzig, SS soldiers forced the prisoners to march. Sara and her sister hid in a haystack and fell behind. Scared, they caught up to the march. Very soon, the German guards and soldiers fled and she saw the Russian army. They were free.

Sara and her sister traveled to Czechoslovakia, but did not want to stay there without their family. Sara and Lea traveled to Bucharest, Romania and found their sister, Haya. They also found out that their brother Ignatz was alive and living in Germany. Sara wrote to her uncle in Ohio, hoping he could help them leave to go to the United States.

While in Bucharest, she met her future husband, Jack Seidner, whom she married in Yugoslavia on August 31, 1945.

They traveled to Italy and remained for eight years.

They departed for the United States with their two children.

Sara moved to Nashville, Tennessee, to be closer to her sister Lea and her brother.

After living in Nashville and raising a family, Sara passed away May 24, 2011. She was committed to Holocaust education in an effort to combat prejudice and hatred so that a Holocaust could never happen again.