Please watch the film of hidden child, Sonja DuBois. In the film, Sonja discussed the anger she felt when she learned at age 12 that her parents had given her away to save her life.  When Sonja first learned about her background she often told people, “Daddy gave me away.” In comparison, Nelly Toll, hidden at a young age with her mother in Lvov, Poland, stated, “My mother’s strong love and reassurance is what saved me.” During the period of the Holocaust it was believed that hidden children would not be psychologically impacted long-term. Both Sonja and Nelly were impacted by their experiences as hidden children. Please view the short film on Nelly Toll, Imagining a Better World:

Write an essay that both summarizes and analyzes Sonja’s and Nelly’s experiences as hidden children during the Holocaust. How did their families attempt to ensure the children’s physical and mental well-being? Be sure to cite specific evidence to support your analysis.

Below are pictures of both Frances Cutler-Hahn and Sonja DuBois that were later published in magazines. Read the excerpts below from the stories of Frances Cutler-Hahn and Sonja DuBois. Write an essay that compares and contrasts these two sources about the meaning of personal identity related to the hidden child experience during the Holocaust. Be sure to cite strong and thorough evidence from both sources to support your argument. 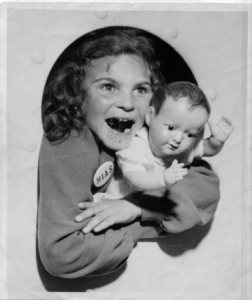 “So —but I didn’t look like anybody, you know, when—it’s amazing how many people—it really did take a village to bring up this child, you know, Mom and Pop took a big risk and they weren’t the only ones—there were many other resistance fighters, such as the pediatrician they found to examine me, who guessed at my age. Yeah, August sounds good, you know. Two years old, fine. You know, it’s only two or three months difference in my age. There was the food stamp office that gave me a stamp so I could eat. Also, there were many aunts and uncles that fed me at least one hot meal a day.”  ~Sonja

“I remember most being jealous and resentful that I was not part of a family.” Frances grew up in various foster homes and was often seated away from the host family during dinners. She always longed for security and mostly for the mother she barely remembered. As a hidden child, Frances has had two religions, five names, seven homes, and eight different families. ~Frances