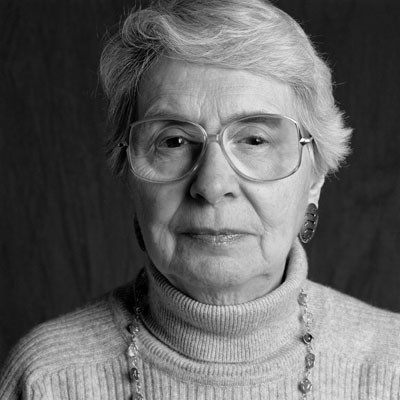 “very meager means. No running water or sanitation…lice, rats, and mice,” and in “constant terror with German soldiers everywhere. It was never safe.”

“Both of my uncles and grandparents had made it to the United States and were desperately trying to get us there with no success.” When Eva Rosenfeld’s father fled to France on a fishing boat looking for a place to relocate his family, he left thirteen-year-old Eva behind. His decision made her both an orphan and a survivor.

In 1936 Eva was prohibited from attending public school, and her parents lost their right to work. They moved to Italy; her brother chose to stay and finish school. Eva recalls, “It was twenty-eight years before I saw him again.”

Her mother died in Italy. When Italy allied with Germany, her father lost his business. After being jailed and released, he escaped to France to make arrangements to bring his family out of Nazi- occupied Europe. Eva stayed behind. Her father was captured and died while in transit to a concentration camp, she was orphaned at age thirteen.

Eva hid out with friends until she was seventeen, living in various places with “very meager means. No running water or sanitation…lice, rats, and mice,” and in “constant terror with German soldiers everywhere. It was never safe.”

When the United States accepted 982 refugees from occupied Italy, Eva boarded an army ship with other “guests“ of President Franklin Roosevelt. They were the only Jewish refugees allowed to enter the United States during wartime. Eva says, “I hardly ever spoke. I didn’t realize it then, but I was totally traumatized by what happened to me.” Eva completed high school, learned English, and graduated from nursing school. “At my graduation in December 1948, I was finally independent.”