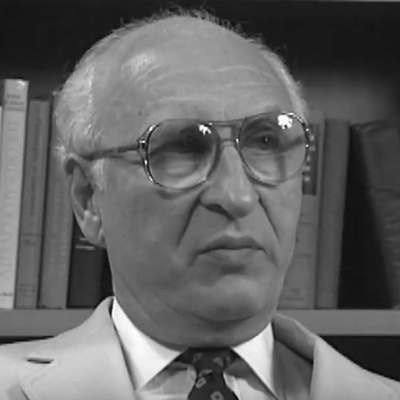 “…we might say that the Italians didn’t bother us. I do remember that we were checked on by Italian security people. They must have been secret police. They came to the place where we stayed. They checked our papers, and they didn’t bother us at all. However, there were some people who were waiting for places to go, and overnight, they would disappear, and nobody knew where they went. And those people who disappeared were Jews from Germany, who were taken at a later time.”

Herman Kaplan and his family tried for three years to get an American visa, and they finally received one in April of 1940. They were sponsored by his grandfather, who had gone to America from Poland at the beginning of the twentieth century. They were supposed to sail on a Swedish ship, but just a few days before they were to leave, Germany invaded Denmark and Norway, and the Germans mined the coast, making it impossible for them to leave. The only avenue left to them was to go through Germany to Italy.

They finally were able to get a transit visa good for only three days. They took the train from Kovno, Lithuania to Berlin, and rather than risk staying in a hotel, they spent the night at the train station. Herman was 14 years old at the time, and he remembers the other train passengers being kind and helpful to his family, despite the fact that they knew they were Jews. They had no problem entering Italy; however, just before they were to sail to America, Italy entered the war, and they were not allowed to sail. At this time, their visas expired, and they had to travel from Genoa to Naples to go to the American consulate. They had no problem renewing their visas at Naples; however, France then capitulated. At this time, an air route was created from Rome, to Barcelona, Madrid, and Lisbon. It was determined that the family should fly to Lisbon and leave from there. They finally arrived in Lisbon and left on a Greek ship called Nea Hellas, which brought them to New York. They began their voyage in April of 1940, and they arrived in New York City on September 12, 1940.

After arriving in New York, Herman’s uncle, his mother’s brother, drove them to Memphis. The children began school in Memphis, Tennessee; however, later his family moved to Danbury, Connecticut to work in factories there. The adjustment was difficult, because Herman knew no English. He started in the eighth grade, but by the time he reached ninth grade, he said that he knew almost all of the English grammar, because his eighth grade grammar teacher was so good.

He said that although he sometimes felt like a curiosity, he was not discriminated against.

Herman’s first impression when he arrived in America “was a feeling of vastness, that there you travel for days in a car and you were still in the United States.” The other distinct feeling that he had was freedom… “freedom of speech, freedom of expression.” He was amazed that people could speak openly about politics and not risk recrimination.

Herman finished high school in Memphis and then began at Southwestern College, where he completed one quarter before he was drafted into the U.S. Army. He entered into service in 1944, and he became an American citizen soon after. His basic training was in 1945 in Florida. He arrived in Europe on VE Day and was stationed in Germany. He was about to go to Japan, but the atomic bomb was dropped. He was then stationed near Amberg, Germany, and he got to see some of the Nuremberg trials. He got out of the army in August 1946, and reapplied to Southwestern, which is Rhodes College today. He graduated in 1950 and entered Vanderbilt Medical School in 1950. Herman met his wife in Boston during his residency training. They married and returned to Nashville, Tennessee, where they raised three children.